Being the best is obviously a terrific honour… but sometimes cruisers think the price point for the luxury is out of their reach. Not so! If you do an apples-to-apples comparision of what Regent includes in its cruise product versus what some larger cruise lines do, you’ll find Regent is right in the mix – or ahead of the game. Plus you get the luxury product with top notch service, much larger cabins, and much smaller ships (around 700 folks sail on Regent, versus 2000 plus folks on Royal Caribbean, etc.)

I recently attended a presentation by Elizabeth Story, director of sales for Encore CruiseEscapes and Andrea McClure, director of sales for Regent Seven Seas. They were giving luxury travel specialists an overview of Regent Seven Seas’ offers, including the latest inclusions, the new ports, the overall experience. What was particularly interesting was the price comparison they gave for 2010 Mediterranean cruises of the Regent Seven Seas Mariner, the Holland American ms Noordam, the Celebrity Equinox, and the Ocean Princess. When you added in the additional fees on the Holland America, Celebrity, and Princess sailings; the price points were very similar!

Regent already includes items such as port charges, air and taxes, airport/ port transfers, shore excursions, gratutities/ service charges, beer/ liquor/ wine, bottle water and soft drinks, and alternative dining (using 3 nights as a guide per cruise). While the base cruise fare (for comparable cabins) on the Regent Seven Seas Mariner APPEARS to be significantly higher ($5550 vs. $1999 on Holland America ms Noordam vs. $3799 on Celebrity Equinox vs. $1999 on Ocean Princess), when you add in all the additional fees, the total costs are pretty similar ($5550 Regent, $5253 HA, $6292 Celebrity, $5142 Princess). The costs per day are also very close ($793 Regent, $750 HA, $899 Celebrity, $735 Princess).

The numbers don’t lie! Regent Seven Seas Cruises is indeed a luxury you can afford! 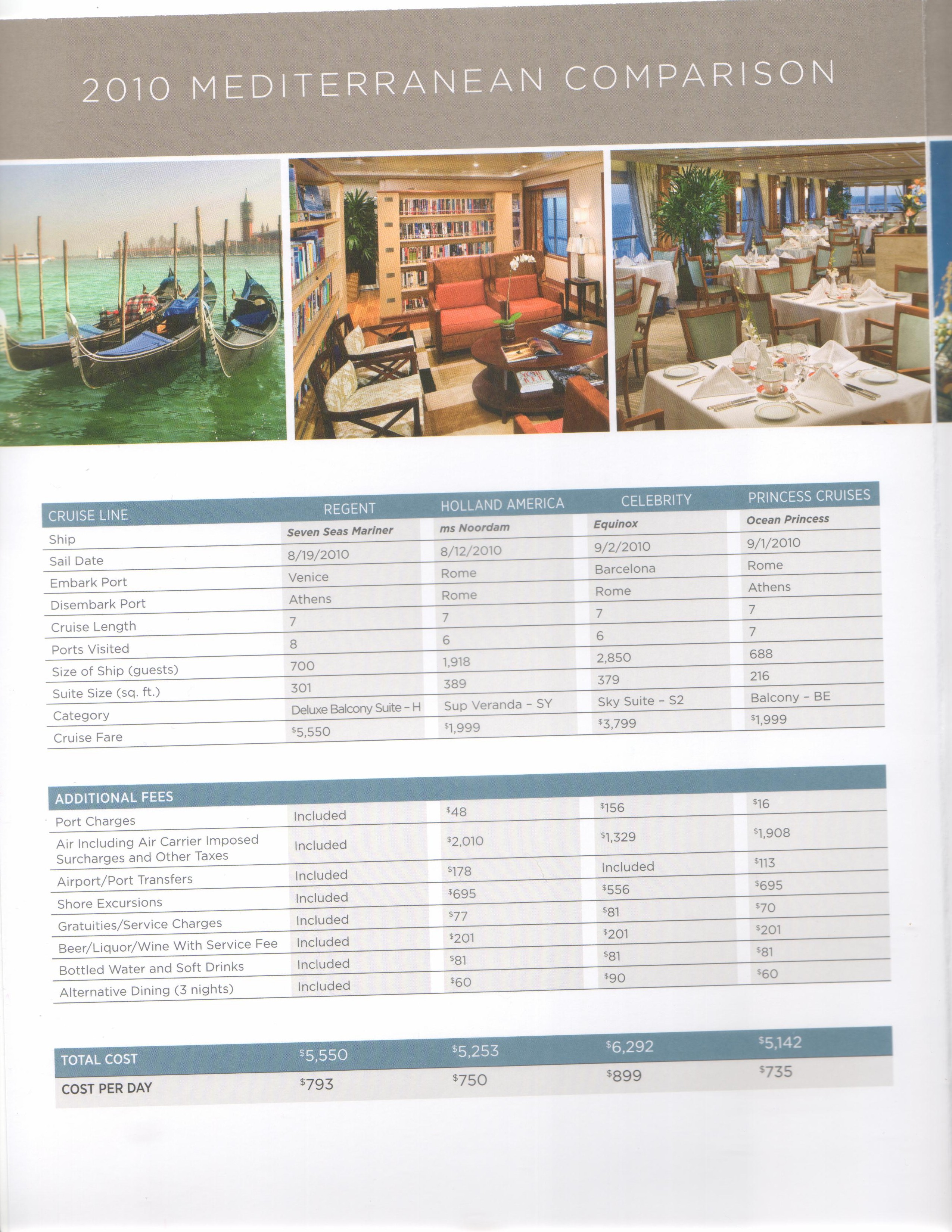